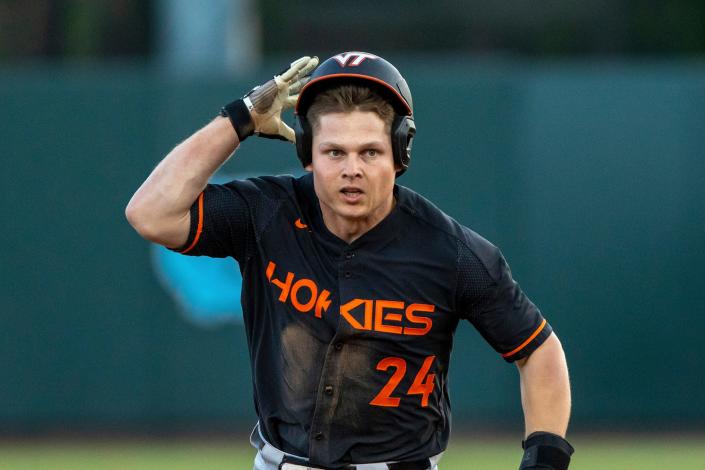 A Virginia Tech team that started 0-4 in Atlantic Coast Conference regular-season play has recovered to claim a league title.

The Hokies made that feat happen in men’s basketball this past season, winning four games in four nights to become ACC Tournament champions, and earning their place in the NCAA Tournament.

And in some ways a repeat performance has been achieved in baseball, albeit more resoundingly. Since dropping its first four conference games, Virginia Tech has blazed a path to the program’s first-ever ACC Coastal Division crown, while becoming one of the stories of the college baseball season.

The Hokies take the league’s No. 1 seed into this week’s 2022 ACC baseball tournament at Truist Field in Charlotte, and figure to land one of the top overall seeds nationally when the NCAA Tournament field is revealed next week.

They’re riding a staggering 30-5 tear across their last 35 games, and for purposes here they’re our pick to win the ACC Tournament, which begins Tuesday. Sure, not exactly the most ambitious of bets or fearless of forecasts, but there’s no denying what Virginia Tech has accomplished in winning nine of its 10 series against league opponents.

Who to watch: Sluggers, top MLB Draft prospect among players to watch in 2022 ACC baseball tournament

Duke captured its first ACC baseball tournament title since 1961 last May in Charlotte. This time around, we see the Hokies breaking through to claim their first-ever ACC Tournament crown.

Picked to finish next-to-last in the Coastal Division during the preseason, the Hokies (40-11) have obliterated that lowly expectation and posted the program’s best regular-season record in nine years. Virginia Tech’s John Szefc was named ACC Coach of the Year on Monday.

Freshman pitcher Drue Hackenberg leads the ACC in victories (10) and ERA (2.44). The Hokies are 12-2 in games during which Hackenberg has made an appearance.

The Hurricanes put together their best regular-season mark in six years and no ACC team collected more victories than Miami’s 20 in league play. Only Virginia Tech, with a 19-9 ACC record, had a better winning percentage in the conference.

Miami (39-16) is the tournament’s No. 3 seed this week in Charlotte, after mashing a season-high six home runs during Saturday’s defeat of Notre Dame, the Atlantic Division runner-up.

Hurricanes starter Carson Palmquist ranks among the ACC leaders in strikeouts (second with 105), victories (third with nine wins) and ERA (fourth, 2.64). Andrew Walters, one of the nation’s dominant closers, tops the ACC with 13 saves.

The Cardinals have claimed five ACC Atlantic Division titles across the last seven seasons and reached the College World Series twice during that period, but remain in search of their first ACC Tournament crown.

Louisville (38-16-1) is the tournament’s No. 2 seed this week, and like Virginia Tech and Miami — and probably Notre Dame and Virginia of the ACC, too — is well positioned to play host to a regional in the NCAA Tournament.

Levi Usher picked up the ACC’s Defensive Player of the Year honor on Monday. The Louisville outfielder also leads the league with 33 stolen bases.

The Tar Heels have won 11 of their last 13 games to finish with a .500 record in ACC play, and have moved from the wrong side of the NCAA Tournament projections to solid footing among the expected 64-team field.

North Carolina (34-19) is the ACC Tournament’s No. 8 seed this week, and will face No. 1 seed Virginia Tech on Friday night to wrap up pool play. The Tar Heels have taken series victories against North Carolina State, Wake Forest and Florida State down the stretch of the regular season.

Danny Serretti’s .369 batting average is the highest by a Tar Heels player since 2009. Freshman standout Vance Honeycutt, who has supplied 17 home runs and 28 stolen bases, is the only player in the ACC with 15 homers and 20 steals this season.

Adam Smith is a sports reporter for the Burlington Times-News and USA TODAY Network. You can reach him by email at [email protected] or @adam_smithTN on Twitter.

Take advantage of our $1 for 6 months sale on digital subscriptions. For special offers, click here.

This article originally appeared on Times-News: Who will win the 2022 ACC baseball tournament?